WTR-TEN10 RACING TEAM TO PARTICIPATE IN THE 1ST ROUND OF CEV, THE SPANISH RACING CHAMPIONSHIP 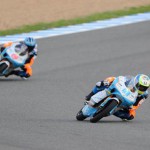 The Grand Prix Bwin of Spain is over since a couple of days and there will be nearly 3 long weeks of break before warming up the engines again, this time on the Portuguese track of Estoril, the third date scheduled in the MotoGP calendar.

The level of competition in the world championship is extremely high as it sees aligned the best riders in the world; even though being part of such category, Francesco and Sarath are aware that the season’s debut is turning out to be no more challenging than what they had already expected. Both of them realise that there still is a long way to go ahead of them, but this is the challenge they have taken up for their professional as well as personal life and they are bringing it on with great commitment and inflexible will. Their path has just begun the climb up and soon, with patience, through ups and downs, it will lead them much higher. It has been like this for every champion.

Starting from the pre-championship tests, our two young riders, session after session, have remarkably progressed under many aspects: Knowledge of the bike, improvement of the riding style, knowledge of the trajectories and reference points to follow on track; last but not least, lap times progressively lowering down.

In particular, although the improvements made were not enough to get qualified in the first two races, anyhow Sarath has made considerably important steps forward if you think about the context he was in just before the jump into the MotoGP.

WTR-Ten10 Racing Team for the 2011 season decided to bet on these two young riders because we believe in their potential and for this purpose, the support on the technical as well as human side are full.

As revealed, among the targets of the Indian-Italian structure there has ever been the one to support and help the growth of the new young talents. In order to let Francesco and Sarath gain more experience, useful to face the course of the world championship’s season, the Team has decided to give them a further help by taking part in the Spanish Racing Championship CEV.

The Team on 17th April is joining the first round of the Buckler Championship that again will be held in Jerez De Le Frontera. The fact that it takes place on the same circuit where we raced last week can only be of advantage to the two riders. Furthermore, the choice of participating right to the Spanish Championship, among many others available in Europe, is also due to the fact that the CEV’s level of motorcycling competition is qualitatively high and close to the MotoGP. Hence it represents a good platform on which gaining more experience in conditions very similar to the ones occurring in the world championship.

With such initiative, aimed at supporting our riders, WTR-Ten10 Racing Team will extend its presence even to some rounds of the Spanish Racing Championship, along with its already established participation to the MotoGP 125cc class.