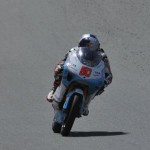 It was a tough race for Sturla because of the wrong start. He tried to recover later but it was physically challenging for him and he had to settle only for the 21st position. Now we have there is a weeks off, and Sturla will take advantage of this to strengthen physically for the race in mid-August in Brno.

It was a good race by Francesco, who improves with every race and now that he has a good feeling with his new technical chief, he can really race at a higher level.

“I started well but then at the first corner I found myself caught between some contenders and I lost some positions. But I am very happy because I improved my lap time in this race and I really enjoyed it. A special thanks to the team that is giving me everything I need to improve from race to race.”

“I started badly. I was practically stopped at the beginning. Then I started to break in, but after a few laps, I had a physical problem and was no longer able to maintain the level of the early laps. Too bad, because the bike is really good and we had also solved the slippery problems, which were encountered yesterday.”