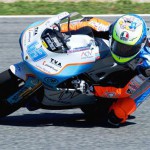 Francesco Mauriello and Sarath Kumar moved to Spain this weekend to take part in the Spanish Racing Championship CEV Buckler, recently opened by the first round of the season held on the Andalusian circuit at Jerez.

There shouldn’t be any better testing ground than the Spanish Championship. Our riders had the opportunity to continue their boost in experience, fracturing the long break that will be over after the Easter holidays.

The level of competition of such a Championship is undoubted; the level of the participating Riders as well as the number of entries are highly respectable – 30 participants on the grid.

Honing skill and adding to experience through a competitive race is much better than running continuous test on track, as the competition’s conditions are totally different and more stimulating. Hence the joint decision of Team and Riders to enter a couple of races of the Spanish Championship.

Today the 12.30pm-race made possible for the Riders to check their level of competitiveness being thrown in with a bunch of experienced Riders who give their all to supersede their opponents.

The final result wasn’t the main priority of this race. But for the record, Francesco finished at the 16th position and Sarath, up against a crash during the course of the race, finished at 26th.

The race was a good debut for Sarath who, until today, hadn’t had the real feel of the conditions and emotions of a 2-stroke-machined race. This experience will be of help to him to be better prepared for the next date.

At the end of the month, Francesco and Sarath will join the Grand Prix of Portugal, enriched by this additional experience at the Andalusian circuit.
CALENDAR – 2013
2015 INDIAN NATIONAL MOTORCYCLE RACING CHAMPIONS – RIDER, TEAM & MANUFACTURER

A SATISFYING ROUND 2 AT THE INDIAN NATIONAL