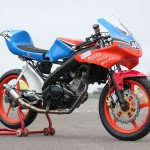 It is Year Five in the competition for Ten10 Racing, India’s first professionally set up motorcycle racing team, a brainchild of Ramji Govindarajan. On the eve of the 2013, Indian National Championships, Ten10 Yamaha Racing launched its 2013 line-up and livery today at Kari Speedway, Coimbatore.

With the strongest line up in five years, this year, the team is supported by Yamaha India. The attack is spearheaded by Indian’s famous motorcycle racer Sarath Kumar #69 with versatile former National Champion Deepak R, #25 and Mathan Kumar, #46 completing the grid for Ten10 Yamaha Racing.

Ten10 Yamaha will be participating in the 165CC premier class (Group C) with motorcycles developed by famous racing technician from Malaysia, Sivanesan who has over eight years experience in developing racing motorcycles in many parts of Asia. Ten10 Yamaha has changed the livery for this year with the right mix of Ten10’s orange and Yamaha’s blue.

“The team is confident of a strong, competitive performance this season with factory support and strong rider and technical line up.” say Mr. Ramji Govindarajan, Director. “We have the best motorcycles from Yamaha, the best riders in India, and are technical supported by the best technician in Asia.”