SARATH WILL NOT TAKE PART IN THE FRENCH GP 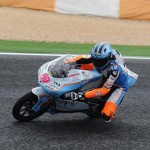 Sarath Kumar will not take part in the French Grand Prix scheduled for this weekend, as the rider is yet to recover from his crash at the Aragon GP Spanish Championship.

Sarath arrived at the Le Mans circuit directly from Spain after racing at the CEV of Aragon last weekend and has decided not to participate in this race, but to return to India.

The French rider Alexis Masbou will replace him at this GP of France. The 23-year-old rider from Limoges has taken part in six World Championships with the two stroke 125 cc series with Honda, Malaguti, Aprilia, and Loncin. Alexis is a rider with experience, who will surely be a help for the rest of the season for WTR-Ten10 Racing Team.