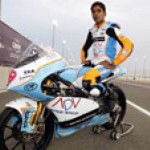 Mumbai Nov 23 (PTI) He’s young, he’s shy and drives only a scooter on the road. But his fastest speed on the racing track is between 240-250 kmph.
18-year-old Sarath Kumar, just into his third season on the track, is all set to make history by becoming the first Indian to participate in the 125cc World Championship, 2011. The Chennai-based rider is among the two to represent Bangalore’s Ten 10 Racing, which, after its three-year strategic tie-up with WTR Team Italy, is set to become the first Indian team to be part of the Moto GP. “I’m very happy because I am doing something which no Indian rider has done before. At the same time, I am taking it just like any other race,” Kumar told reporters here to announce Ten 10 Racing’s partnership with WTR. “Moto GP is a challenge. I didn’t expect to reach there so soon,” he added.

Kumar, who represented India in the UAM Asia Cup in Japan in September, denied having any nerves before his debut on the big stage. “If a batsman is afraid of the ball, he cannot bat in cricket. It is the same with us,” he said. “The first year I’ll look for the experience. I would like to perform well from the second year on,” he added. Kumar, a BBA student from the Madras University, developed an interest for the sport after he went to watch races along with his friends.

However, he began practising without the approval of his mother, a beautician and the sole bread earner in the family. MORE PTI VKV DK AH.