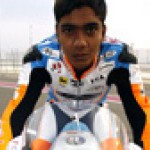 The Grand Prix Bwin of Spain is the second event of the race calendar and will take place this weekend. Located on the Southern tip of the country opposite the African continent, Jerez De La Frontera is the scene of one of the historical autodromes of the championship, active since 1985, that hosts many of the most prestigious motor racing sports like Formula 1.
The Jerez circuit is considered a very technical abrasive-surfaced track that mixes fast and slow corners to changes in elevation. Every year the IRTA Test takes place here. Given its characteristics, it is hence no surprise that it is considered to be a good testing ground to challenge the teams and the riders alike.

After the first race in Qatar last week, WTR-Ten10 Racing Team and the two riders, Francesco Mauriello, the Italian Champion and Sarath Kumar, the Indian Champion as well as the first ever Indian rider in MotoGP, are ready to get back to the welcoming and warm Spanish land.
Our two young riders got to know the track during the 3-day IRTA Test held in early March. If in Qatar they had to struggle a little bit, understandably due to their first experience on a new track and under unusual conditions (floodlights in the desert), this time they arrive more prepared and they cannot wait to ride again on their Aprilia bikes.

Francesco had already raced in Jerez during 2010 CEV Championship, obtaining a good place. Furthermore through the March tests, he has strengthened his technical knowledge on track; so all the experience gained so far will definitely help him for the upcoming performance. The advantage of being a young rider is the one to have a great margin of growth and Francesco is committing himself to express his bright potential and to make happy an entire city his beloved Naples.

Sarath is a newcomer in the 2-stroke category but he has grit in him. His training will take longer than the team mate due to the totally different experience at his back but since the first tests he has displayed a steady and continuous performance carried on at significant steps in terms of cutting off seconds from his lap times. His target is to catch up with other rider in the category and to qualify within 107%, in order to participate in his first race of 2011 MotoGP Championship. In India, many people are already calling him as local hero and great hope is set on this young lad that represents the natural evolution of the emerging countries that are progressing on the technical development of motorsports.

According to the current weather forecasts, there’s a perfect climate for the GP in Jerez – delightfully mild temperatures with almost summery peaks, clear throughout the weekend except for some cloudiness.

The Team is already at work to set the last few solutions to the strategy to adopt in Jerez, while the riders still have a couple of days to relax; good to prepare for the right mental balance for the race. Departure for Spain set on Wednesday is nearly here; Sarath will have a long journey by plane that will take him from India to Europe.

WTR-Ten10 Racing Team is ready for the new adventure and will be in action this weekend!