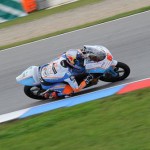 It was a good day of racing at the Brno Circuit as the weather was dry without any rain. After a good start by Sturla, he managed to finish in the 16th position, while Mauriello was unable to pick up his pace during the race. Though it was a good race by Sturla, he had some problems with his rear tyre as it started slipping during the most important part of the race, shortly after the mid-race, when he was able to grab some points. He was not lucky enough to get points and he finished 16th, just 57 thousandth of a second a away from the points. Francesco Mauriello crossed the finish line ins the 20th position.

I started badly and I found myself entangled with a group of slower riders and it took me a while to find the right pace to recover positions. But I am pretty happy with how it went for the race because I still can improve and I am convinced that if I could get a good start to finish in the points. The bike was working really well and I am satisfied with my performance.

Halfway through the race I started having some problems with the rear tyre that slid out of the corners a lot and unfortunately I had to drive with greater caution. I also suffered a overtaking, while there were the yellow flags but in any case I am satisfied for the race but today, with a little more luck, I could have finished really well.