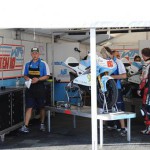 Though it was a good bike, Francesco had very less experience on this tough circuit. He had raced on this track in the CEV that facilitated him in learning the circuit, but this track is very difficult. However, he had a much better lap time, improving more than two seconds on each lap. Sturla has improved the time registered by him last year by more than 1.5 seconds. On the last lap when he was pushing more, a suspected electrical problem resulted in his retirement.
2011-09-18
Francesco Mauriello # 43. 2 02 .881 lap time – 25th on the grid.
It was a difficult practice session for both the WTR-Ten10 Racing riders who did their best in the free practice with the bikes that they had, which were good.

“At the end of the turn I was forcing the pace, but the bike suddenly died. Now the mechanics will check what has been the problem. Apart from that inconvenience I feel good and the bike is ok. Tomorrow I am confident for the race.”