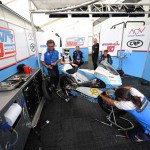 Next Sunday, the city of Indianapolis, which is known for its namesake race track, the Indianapolis Motor Speedway, will host one of the two races of the US MotoGP calendar. Since 2008, the Indianapolis Circuit is part of the World Championship MotoGP. Unlike the Laguna Seca, which hosts the other US MotoGP race, this track is similar to the F1 track with some modifications and it runs counter-clockwise.

In 2008, the Indianapolis MotoGP was disrupted due to Hurricane Ike. While Valentino Rossi took the MotoGP victory, the 250cc and 125cc races did not happen because of the strong wind. In 2009, the weather was fine and the three races are regularly held since then. In that year, in 125cc category, Pol Espargaro won the race and the 250 class went to Marco Simoncelli, while Jorge Lorenzo won the MotoGP class, thanks to the Rossi and Pedrosa crash.

In 2010 also the race took place without any disruption and saw the Spanish colours dominate the races. In 125cc class, the victory went to Spaniard Nicolas Terol, who shared the podium with Sandro Cortese and Pol Espargaro. MotoGP was won by Pedrosa and in Moto2 Elias won the race.

WTR-Ten10 Racing rider Fagerhaug Sturla, who competed in 2010 for another team, could not make it to the race due to an injury. This year, he has the opportunity to race in one of the most famous circuits in the world along with the Italian Champion, Francesco Mauriello, who will race on this track for the first time.