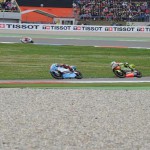 This weekend the Grand Prix will take place at the circuit that is most loved by the Italian riders. The circuit is also one of the most technically advanced and the most beautiful circuits in MotoGP. The circuit has seen some of the best battles in which the passion of the riders was felt in the air and on the skin of every fan.

This year, the Grand Prix pretty much marks the turning point of World Championship and will offer suggestions and interests in all the three categories.

In MotoGP, Valentino Rossi seeks redemption with the Ducati that until now did not allow him to fight for the top of the general classification.

In Moto2, Stefan Bradl’s contenders will try to beat him and limit the 57-point advantage ahead of the second placed Marc Marquez.

Nicolas Terol in 125cc category lost a few points after the injury in the last race and that has helped Jonas Folger to reduce the gap between him and the leader to 27 points. Terol also has Zarco and Cortese in hot-pursuit with a 34-point of advantage, but there has been a marked improvement in these riders, especially by Zarco.

For WTR-Ten10 Racing team, Sturla Fagerhaug will still be in the race as a substitute for Sarath Kumar and the Italian Champion Francesco Mauriello will try to come back strong after the crash in the qualifying session at Assen, which forced him to start from behind in the Assen race.