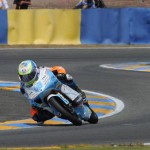 In June, the World Championship moves into the hottest and most important stage of the season for the teams and riders. Starting with Catalunya and Silverstone and a week’s gap before the season continues with Assen and the Italian Grand Prix at Mugello, which this year is scheduled for the first weekend of July.

This weekend the circus moves to Barcelona at the Circuit of Montmeló Catalonia, the independent community located at the north-east end of the Iberian Peninsula is the richest region of Spain.

WTR-Ten10 Racing Team arrives in Barcelona without having solved the problems that have characterized the past weeks. Indian rider Sarath Kumar has not yet recovered his full mobility on his right arm, which was injured in Spain and now he is involved in long physiotherapy treatments.

Waiting for a possible recovery of Sarath Kumar, which seems to take quite a long time, the Sport Director has decided to recruit the young Norwegian rider, Sturla Fagerhaug, who is not even 20 years, but with great talent and who has not found his space in the World Championship to express his skills at his best this year.

There is no problem for the team’s other rider, the Neapolitan Francesco Mauriello, who will be once again on a completely unknown track for him. Thus the race will be difficult with a technical track to learn and memorize. This is an additional experience for the young rider, which he can take advantage of in the coming years.