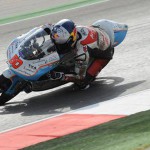 The Spanish circuit hosted its first race in the MotoGP calendar in the 2010 season, as it took September 19 date originally planned for the Hungarian Grand Prix. This race was canceled because the track for two years Balatonring was not ready.

This spectacular circuit is 5.344 km long and Francesco has already competed here in the CEV this year. Sturla competed in last year’s Aragon GP and finished at 15th position