NOT A GOOD ASSEN GP FOR WTR-TEN10 RACING 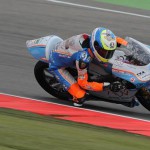 The Assen Grand Prix did not go as per WTR-Ten10 Racing team’s plan as Sturla Fagerhaug failed to the meet the expectations after qualifying at 17th position. Though he could have managed to gain some points in this race, he could not capitalise, but finished at 31st place.

Sturla did not start well and he apparently lost position, but he tried to pick up pace and started pushing harder and because of this he had a crash. Though he got up quickly and rejoined the race, he could not go beyond 31st place till the end. Adding to his woes, the race was stopped with seven laps to go due to the rain.

Francesco Mauriello could only manage to finish at the 24th position after he started the race from the last place following the qualifier crash.

In today’s race in Assen, unfortunately I started too far behind. I had a good first lap and had gained some positions. The bike was perfect today. I just pushed hard, but in the 14th lap while I was going to overtake the other rider the race was stopped for rain.

I did not start very well and I lost some positions, but then I started to climb. The bike was ok. So I tried to force it a bit more to try to overcome the riders in front of me, but in the sixth corner I lost control and I found myself on the ground. I rejoined the race but at that point the race was over for me. Too bad because the Team had done a great job.