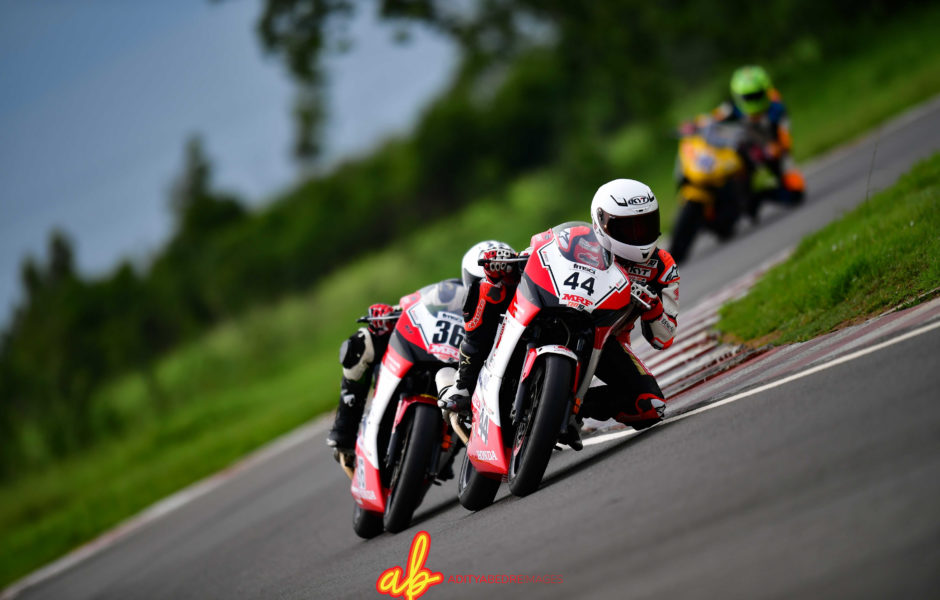 Idemitsu Honda Ten10 Racing started the Round 4 weekend with a single goal – to strengthen their championship standings before the end of this crucial round – and it was mission accomplished with the team winning 14 trophies, 10 podiums, 2 classes in 4 races and taking a comfortable lead ahead of the final round scheduled for end September 2019

It was akin to a demolition derby with our riders diminishing the competition right from qualifying practice. Rajiv Sethu #80 the championship leader opened the weekend with the lap record qualifying session 1.56.894. The fastest ever lap clocked on a Pro-Stock 165 bike. Riding his Honda CBR150R Rajiv exuberated confidence once again throughout the weekend to take two victories. Race 1 saw him controlling the race from the front, winning it quite comfortably and in Race 2 with the key competitors out of contention due to technical problems, Rajiv had to contend with his team mate and his now championship rival, Sarath Kumar #69. The duo had a scrap of their own with the former winning with a pass in the last lap.

While in the PS200 class, championship leader Anish Shetty #44 scored a double podium this weekend once again, sealing his lead in the championship to his nearest rival and teammate, Abhishek Vasudev #36. In Race1, Anish had a comfortable lead initially, however with a small technical glitch in lap 3 he had to nurse the bike home to secure his victory while Abhishek finished a close second and teammate Aravind B #13 did not finish due to a crash fighting for second position. In Race 2, which was an 8 lapper, there were no mishaps. Aravind finished a comfortable third while Abishek and Anish repeated their performances from Race 1 to give the team a 1, 2, 3 finish in the class.

Overall it was a proud weekend as the team achieved what was planned.

With the final round scheduled for the end of September, the team is confident to give a good fight for the championship.

These results and performances wouldn’t have been possible without the support of our sponsors who share the same passion of success as us. Thank you Honda Motorcycle & Scooter India Pvt Ltd, Idemitsu Lubricants India, Corporate Warranties, SKF Bearings, KYT Helmets, Brotherhood Biking Gears, Aracer, Planetsurf Creations and Proathlix.