Choosing the Raceway over the Rat Race
By Hari 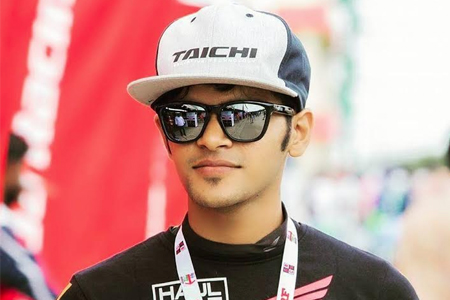 As a child, there were many times I came across motorbike racing as I changed channels on TV. I often used to wonder what was so great about going round and round at such high speeds! I feel quite different now, as all I can think of is my next race on the next circuit, opening up the throttle and going for the win.

I don’t come from a rich family. My parents’ dream was for me to become an engineer, earn good money, and help support the family. Motorcycle racing came to me almost out of the blue; unplanned. I was 17 when the idea came into my head in 2011. I liked riding, but I knew riding or racing on the roads was unsafe. I felt the urge to race and began to look for places I could do that. I found out about the Madras Motor Race Track in Sriperembudur and the Kari Motor Speedway in Coimbatore. I found that for a fee I could get a bike, a biking suit and ride to my heart’s content. And that was the beginning.

Speeding around a racetrack opened up a world I had never known existed. I found out about racing professionally in India, and slowly learnt about the different racing academies, bikes and opportunities. For a year until I was 18, I learnt and rode as much as I could, as in India being a minor did not allow me to race professionally. Finally in 2012, I had my first break at the Honda One Make Race. I didn’t do very well and my family were totally against it. It was a hard time as the pressure to complete my mechanical engineering degree was high while I wanted to pursue my new dream.

My family was very worried about the costs involved in racing – it is a very expensive sport, and also that I would hurt myself or worse. So it was with this huge obstacle that I went into the Honda One Make Race 2013 and there, won my first podium riding a Honda CBF Stunner. I think that was the cornerstone of my riding career. I proved then to my family and myself that not only did I enjoy the sport, but that I was also actually good at it!

My mother came over to my side and began to support my choice, and my father slowly began a process of acceptance. His only condition, however, was that I should finish my engineering degree. So with the support of my friends at college, teachers, and some amount of perseverance on my part, I managed to finish and earn that mechanical engineering degree.

Since then I have come a long way. Racing for me is about the speed, the feeling of opening the throttle and flying. I believe that it works as a stress buster and has helped me be a calmer, more focused person. I love to ride and ride fast. I never thought that I would be a racer, yet here I am.

My podium win in 2013 removed all doubt about racing as a career from my mind. Until then I had been in two minds about pursuing it versus a safer more dependable career in engineering. But with that magical win, qualifying ahead of so many others (some 60 people tried out) and then making it to the top 3, was a real boost to me. I realised then that I had it in me to be a racer, and a winner.

I think once I had made up my mind, there really was no looking back. In 2014, I won the Indian National Championship in the Novice Category riding a Yamaha R15. This was my first experience being in the lead. It was an all-new feeling and I had no markers ahead of me to know when to brake or when to open the throttle. It was both exhilarating and frightening at the same time. I had to recall everything I had ever heard experts talk about and after that race I paid more attention to their various tips.

In 2015, I participated in my first international race, the Asia Dream Cup. A whole new world! I was competing with riders much younger and faster than me. It took me a good three-four rounds before I understood what I had to do and how to adjust my riding and bike settings if I wanted to be fast and further ahead. That series was a huge learning curve for me, and although I finished 15th or so, I know I took away a lot more.

Riding is so much about application of what you learn. So now in 2016, I am back to race again in the Asia Dream Cup Championship, and this time I know what I am in for. I have won two podium places so far, and working hard to win more.

The media attention I get when I win is great. I realise then that I should be proud of myself. And it is great to feel the appreciation that keeps me motivated.

When I think of other riders at my level, I find that many of them have been mentored to push ahead, no matter the price. While physical contact and pushing are all par for the course, there are several times this happens without any provocation. I don’t want to name names, but there are some on the track that have no qualms about hurting another rider to get ahead. While I can understand this happening towards the end of a race with a couple of laps to go and you have to do whatever you have to in order to win, it makes no sense to push or hurt someone at the beginning when everyone is struggling to get ahead.

My advice to younger aspiring riders is: yes, come to the track and race your heart out. But whatever you do, do NOT race on the roads and endanger other people’s lives. And don’t purposely endanger someone’s life on the track either.

I have sacrificed a lot to be where I am today. Whether it is time with friends and family, or money, time and energy invested in to the sport, I have certainly done a lot to get where I am. I am quite determined to make racing my life. I am so grateful to Honda for the opportunities that they have given me and to my team, Ten10 Racing for believing in me and nurturing my talent.

There was a time I had butterflies in my stomach when I got onto the track. Today it is just the happiest moment when I suit up and sit on my bike. This was the best decision of my life.