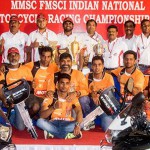 Although we had sealed the Honda CBR 250R Championship with one round to spare our fight for the Indian National Motorcycle Racing Championship was closely fought and we had to win all the 3 titles, Rider, Team and Manufacturer. A win was must over the weekend.

Indian Modified Class – Group C 165CC
A tough fight with Yamaha right through the season meant a must win final round for us to seal the championship. We had to keep our promises to our rider Mathana Kumar and Honda Motorcycle & Scooters India to get them their maiden championships kept us under pressure.

We also had a change in our rider line up with young Rajiv Sethu #81 making his debut in the Group C National Championship class. He comes into this class with great confidence after a year long exposure in the Honda Asia Dream Cup grid.

Race 1: Mathana scored his fifth win of the season extending lead with his points tally to 133 for a 14-point lead over his nearest rival Ananth Raj of Kingdom Racing India who finished seventh. However the second position was closely fought with out upcoming star rider Rajiv Sethu clinching his first podium in the Group C national championship class giving the Ten10 and Honda the much require points for the championship.

Race 2: Despite a comfortable win in Race 1 Mathan had to win this race to seal his championship and the final race of the season is always tricky especially when closely contested. However Mathan Pocket Rocket Kumar managed pull a double for the weekend comfortably and seal his championship and also win the team championship. Rajiv Sethu once again stood next to Mathan on the podium ensuring Honda wins their maiden Manufacturer’s title of the 2015 season.

Sarath Kumar who has just recovered from multiple surgery after a major crash in the final round ADC managed to get back on the bike riding the fully modified class for us. The fully modified Honda CBR150 which is still under development has made some big progress with new engine modification and suspensions.

Race 1: Sarath had a few setup problem with the bike and was not competitive enough to stay with the fast TVS bikes who have dominated the season throughly. However a lot of data being collected during these races for the future development. Sarath managed to finish 5th in this race with tyre problems.

Race 2: With new rear tyres Sarath managed to find some rear grip and set the fastest ever lap on a Honda Group B around MMRT 1.58.4xx and keep up with the TVS bikes showing signs of improvement in the right direction for the Honda CBR150R for the 2016 season

Honda CBR 250R Championship: It was more a relaxed weekend for the team in the Honda CBR 250R race with both the Rider and Team championship won Ten10, the team worked hard to put Mathana Kumar in top position which would have been possible if he score a victory in any one race. With Sarath skipping this race to nurse his injuries the other Ten10 riders showed their dominance in this class by score consistent podiums in both the races over the weekend wrapping up the 2015 Honda One Make Championship season in style.

Ramji Govindarajan, Managing Director Ten10 Racing : We had a more stable and stronger team this season and with the Honda’s reliability we managed to win the championships quite comfortably despite a no-score in one of the rounds. We were always confident about the machinery in the Group C class as the motorcycle that we ran were not pushed to the limit and yet unbeatable.

However in the fully modified Group B class we saw some great development and we are confident with the support of HMSI we will be in winning ways in this class also in the 2016 season.As always our start rider Sarath Kumar dominated the 250 class and got us the double championship that we missed out last year. A new find Rajiv has shown some great progress in the 250 and the 165 CC class and we will be very excited to support his racing career for the 2016 season.

The key to our success this year has been the right set of riders and most importantly the support from our sponsors Honda, Motul Lubricants, 100 Plus Isotonic Drinks, Dakki Nutritions, ASK, Waxoyl, Pyramid Tiles, 7 Hills Homes & Planetsurf Creations and we thank them for they great support’s