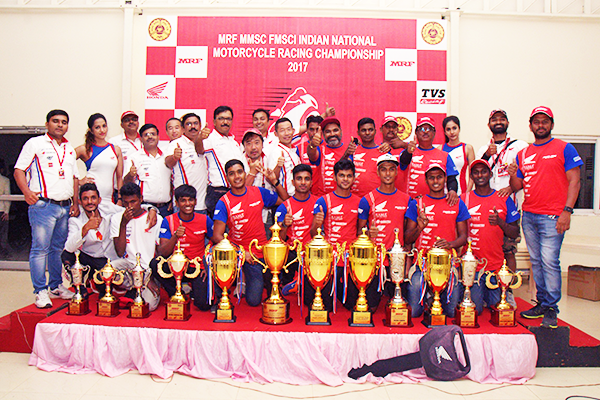 A round-up of the 2017 Indian National Motorcycle Racing Championships.

A big step for Honda Ten10 Racing Team in the 2017 season. Having being declared Champions in the Pro-Stock Category in 2016, the hunger to win the 2017 season was immense and intense. The team began working immediately after the 2016 season as the loss to TVS Racing in the SuperSport 165 class was felt hard and Honda came back with a master plan to build all new SuperSport machines based on the HondaCBR150R.

Round 1 of the 2017 season began in Coimbatore at the Kari Motor Speedway. Honda and Ten10 Racing had worked on the new racing machines and our first upgrade for Round 1 was a brand new engine on a old chassis. Immediately we made our presence felt as Rajiv and Mathan caught up with the top TVS bikes right from the word go. Rajiv scored his first victory while Mathan brought home second position and thus we began our battle for the Championship. Our domination continued in the Pro-Stock 165 with double podiums in both the races by Mithun, Soorya & Aravind and put us in the top spot already.

Coimbatore also gave us good new talent in the presence of Mr. Fujiwara and together we spotted 16 year old Senthil Kumar who was inducted into the team from Round 2.

A special Round 2 was held in July at MMRT, Chennai in the presence of the new President of Honda Motorcycles and Scooters India Pvt Ltd. Mr. Minoru Kato. The machines got a serious upgrade with a brand new racing chassis for the CBR150R, new fuel tank and all new body kit – for the first time in India, we had a complete racing bike.

The presence of HMSI President and Managing Director of Idemitsu Lubricants Mr. Masanori Enomoto our main sponsor gave the team additional confidence and energy to create a new record of podiums. Rajiv Sethu had a double victory that weekend and the Pro-Stock boys brought us an all Honda podium in Race 2. This put the Honda Ten10 Racing team in a strong position for the rest of the season.

The catch up game began in Round 3 held during the first weekend of August 2017 at MMRT once again. Having received some serious upgrades in Round 2 Honda Ten10 Racing was confident going into this round. However, the competition caught up with Rajiv Sethu with conditions favouring them in Race 1 with the race being shortened and Rajiv had to settle for third position. Mathan Kumar brought home a great victory in Race 2 to keep the fight on with TVS Racing. Pro-Stock championship leader Mithun Kumar saw his season cut short with a crash resulting in a broken fibula in Race 1 giving the race lead and Championship lead to his teammate B. Aravind who took over the mantel to carry on the Championship fight. But the competition had started catching up fast.

Rains in Chennai, no wet tyres in the INMRC and the full loop of the MMRT circuit getting flooded played a major role in the turning the tables for Honda Ten10 Racing Team in Round 4 of the Championship. The race was run on the 2.1 kms short loop which played to the advantage of the competition putting pressure on the HTRT riders. Having not ridden or with no data of the performance of the new SuperSport 165 machines in the short loop gave the TVS Racing riders an edge over the Honda machines. Despite that our riders rode hard to keep the Championship dream alive. Rajiv scored a safe second in Race 1 but crashed out in Race 2 losing valuable championship points to his competitor. Mathan once again finished on top in Race 2 to score valuable points for himself and the team. But the competition had already closed in with just 1 point separating the riders’ table. The Pro-Stock riders had a tough outing too with no finishers in Race 1 and Race 2 saw Anish Shetty and Aravind B finishing first and second respectively to seal the team championship for Honda Ten10 Racing Team.

It was a long, challenging season closely fought and with just one point separating the leaders it was do or die, a must win for both the riders. The intensity was high as we went into Round 5, the season’s final race held at MMRT amidst confusion on tyres, regulations and team orders.

In the SuperSport 165 Honda Ten10 Racing fielded four riders with experienced ARRC racer Sarath Kumar joining Rajiv, Mathan and Hari to beef up the competition against four TVS Racing racers. It was a straight shoot-out between Rajiv and TVS Racer Jagan and Race 1 saw exactly what we wanted “may the best racer win”. Rajiv and Jagan fought hard exchanging places every lap when misfortune struck Rajiv in the form of missing a gear down the back straight in his last lap, and this gave Jagan the advantage – not only the race win but also the championship lead and this turned the pressure on Rajiv for the final race of the season on Sunday. Mathan on the other Honda bike suffered a crash in lap 2 while Sarath and Hari played their role in keeping the other TVS racers busy and the Championship a close fight.

Pro-Stocks riders had a safe race with Aravind riding for his championship points while Anish and Soorya suffered technical issues in Race 1 bringing the Pro-Stock championship also down to the wire. However a finish by Aravind and a podium by Anish Shetty in Race 2 sealed the Championship once again for Aravind B, Honda Ten10 Racing Team & Honda.

Rajiv had to finish at the top in Race 2 to seal his Championship. The nerves were high and young Rajiv who had a good start to take the lead into the first corner had an unfortunate incident in turn 2 and this proved fatal for the race & Championship. Mathan on the other hand rode a good race to take the lead in Race 2 and won the final battle for Honda Ten10 Racing Team.

The Honda CBR250R Championship was won by Honda Ten10 Racing Team for the fourth consecutive year – winning both the rider and the team Championship.

26 Podiums, 2 Championships, 1 First Runner-up Champion, 2 Second Runner-up Champion were the total accolades the team collected at the five round season conducted by Madras Motorsports Club in 2017 sponsored by MRF tyres.

The war is lost and the scars are still fresh. As we nurse them and prepare for the next season, the team is already back to the drawing board to build a faster and quicker Honda CBR150R racing machine for 2018.

This is racing, it never ends!