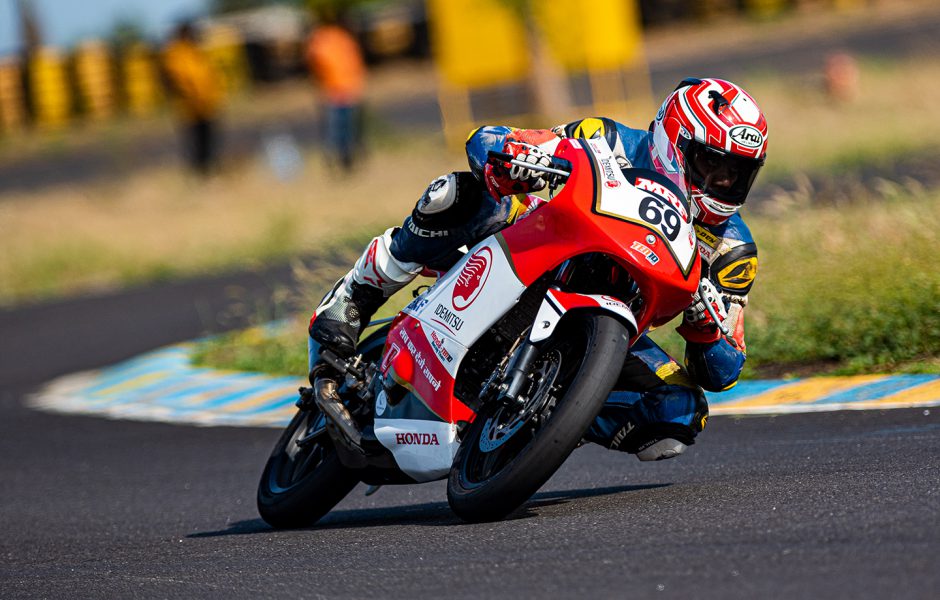 Honda Ten10 Racing Team has been a top competitor in the Pro-Stock 165 class over the years. With four consecutive championship titles the team has been dominating in this class over other manufacturers and riders. Going into the 2019 season, defending the title once again on a Honda CBR 150R, the team seeded three top potential riders, K. Kannan, Yashas RL and Aravind B, 2016 PS165 National Champion to compete in this category.

A last minute change in the classes by the organisers due to the elimination of classes SS165 and PS300 tightened the competition in the PS165 with experienced and faster riders transferring themselves to this category. A strategic decision was taken by the team to move its own experienced rider, S. Sarath Kumar from PS300 to PS165 it paid off.

Sarath being the most experienced rider in the team was the perfect candidate to take the fight to a likewise competition. The team built an additional fourth bike in just 1 day to give Sarath a brilliant package and he did not let the team down, putting himself on the first row of the grid in the qualifying round, close to the pole setter K. Jagan of TVS Racing, the arch rival. Whilst the newcomers, K.Kannan started in 5th place, Aravind B in 7th and Yashas RL in 9th place, with an overall grid of 22 bikes.

The 10 lap race was expected to be a cracker with a fierce expected battle between Sarath and Jagan, however due to a mechanical failure in the warm-up lap for Jagan, it gave Sarath a clear shot to the lead and he finished in first place with a huge and comfortable margin. Tension prevailed due to a protest for infringement of the rules by one of the competitors, although after a thorough check the FMSCI technical team cleared Sarath and the team of any deviations and final results we declared.

With this Sarath opened the season’s account for the team and most importantly for himself by scoring a top spot on the podium after three long years. Supported by Honda, Idemitsu Lubricants, Corporate Warranties and SKF Bearings the team had a flawless run in Race 1 with K. Kannan, Aravind B and Yashas RL finishing in 4th, 6th and 9th positions respectively, earning precious team championship points.

The mood to see Sarath and his arch rival fight ensued for Race 2. Marred with many re-starts and the reduction of laps due to red flags, the race turned out to be a three lap sprint race as against 12 laps. This meant the start has to be perfect. However Sarath had a slower start than his competitor who managed to take a huge lead in lap 1. Sarath managed to fight back but ended up nursing his overheating engine to settle for a safe second position on the podium, collecting precious championship points and the championship lead. Whilst Yashas RL finished 4th, Aravind followed him closely to finish 5th and K Kannan who was held up amidst few falling riders in the last lap had to settle for 9th despite showing good pace through the weekend.

With the key support of Honda, Idemitsu Lubricants, Corporate Warranties and SKF Bearings the team had a great start to the new season and they go into Round 2, scheduled for 6-7 July with loads of confidence and a lead in the Championship.