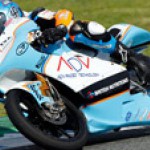 On day three of the Commercial Bank Grand Prix of Qatar besides the normal qualifying, unlike the past years even the warm-up session, usually scheduled before the Sunday race, took place today. Therefore tomorrow the riders will align on the starting grid ready to kick off with no warm-up laps.

The team and our riders have worked hard in order to make it in the qualifying as both the riders did not enter the standings of the free practice sessions of the past days.

Having found a more performing solution, Francesco’s constant efforts paid off as he qualified for the first race of his just-started career into MotoGP. Despite having improved his performance of 2.5 seconds at the last lap before the qualifying’s end, he will start tomorrow from the bottom row. Nevertheless, in the warm-up, Francesco clocked a better time than the qualifying one at 2’13.307. These are important results because at the moment, even though we are not mainly aiming at the classification result, what matters the most is above the Rider’s progress.

Sarath, at his first qualifying in the Championship of his career, also today continued to improve his lap times; in fact from Thursday up to date, he has cut off more than 13 seconds. Until the last lap, Sarath entered the qualifying list, but Terol by improving the pole, already his, at a few minutes from the end lowered the time classification of 1.5 tenths. At that same time, Sarath was running his last lap and the crash he had in the last corner did not allow the completion of what would have been his fastest lap. For only 1.4 tenths of a second, Sarath unfortunately did not manage to qualify as the limit time had become of 2’15.467.

The Team takes part to its first race of the season with only Francesco on the grid, whereas Sarath will have to wait for the Spanish GP in Jerez to get back on track, in two weeks time. However this first experience of his has been great for learning and it will definitely help him in being better prepared for the next date of early April.

Francesco Mauriello (2’14.994 ), 30th position:
“It’s been a positive day because we did whatever we could and in the end, we made it to qualify on the last lap. It doesn’t matter if we are at the bottom, after all tomorrow is a brand new day. It’s been a pity though, because in the warm up I clocked a better time. We still have some problems to the cycling on which working on to be fixed during the warm up. I’m satisfied because I’m qualified but there’s still a lot of work to do on the bike”.