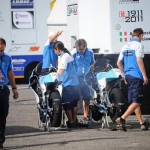 After a rainy qualifying session, it was like summer during the race with the bright sun warming the surface of the Tuscan track.

Following a difficult start, Sturla was able to find a good rhythm that allowed him to improve his position and was fighting hard for a good finish. Unfortunately, in the heat of the competition, which led him to run in 2:00.510, Sturla suffered a crash that resulted in his retirement from the race, despite an attempt to return to the track.

Francesco Mauriello had a better start, but once again suffered a contact at the first turn which caused him to lose several positions. He found a good pace, lapping in 2:01.06 and improving his time on the lap. In the end, Francesco managed to finish the race at 21st position.

My goal was to improve the feeling with the bike and get with the times. I am pleased to have succeeded and I am sorry for the contact at the first corner, which meant I lost several positions.

The bike was going really well and I felt myself in shape. The start was not easy, because of the first long turn, which is not easy. Unfortunately, I got a little louder in a corner and when I left the brakes the bike has broken down and I was locked before.