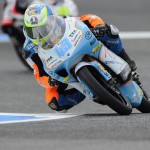 WTR Ten10 Racing rider Francesco Mauriello managed to finish at 12th place at the Aragon GP Spanish Championship. Though this was not the MotoGP, the race was a real confidence booster for the young rider. A lot of data was collected during this race, which would be useful for the World Championship.

However, Francesco’s team-mate Sarath Kumar had a rather strange reaction on the part of his bike, as on the 7th lap his bike turned off without any apparent reason. In fact the bike was working fine when it was taken into the garage. Now the engineers will need to find the possible cause of this temporary problem with the bike.

I started well but at the first corner I took the inside part and many riders had the opportunity to overtake me on the outside. During the sixth lap, I almost crashed and to balance the bike, I had to take the ground very strongly with my knee. But I’m happy, the bike was working really well with the latest engine and chassis modifications and I found myself at ease.

The bike suddenly turned off and I could not restart. I don’t know what happened. At the garage it was working fine. Too bad, I could have got more experience.