DOUBLE RACE WIN FOR SARATH ENDS IN VAIN – ROUND 1, INMRC 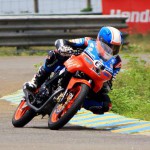 Champion racer S Sarath Kumar of Ten10 Yamaha Racing took the lead in Indian National Motor Racing Championship (INMRC) by winning both the races in Round 1 on Saturday and Sunday in the 165 cc Group C open category. The races were held at the Kari Motor Speed way in Coimbatore.

Sarath who rocketed to the top pole position in the qualifying races on Saturday did not yield any leeway to the competing teams. In both the races, held on Saturday and and Sunday, he took comfortably took the lead and finished the 10 lap races by a large margin.

However, due minor technical irregularity in the one the racing component and the subsequent penalty, Sarath Kumar had to forego his victory.

Despite the unfortunate change in result the team is charged up and confident of wining the next round as the motorcycles are pretty fast and with the support of Yamaha India the performance is expected to even get better in the upcoming rounds.

Ten10 Yamaha Racing Team Director Ramji Govindarajan said “It’s been a great start for the 2013 National Championship for us. This year, we have a new outfit with Yamaha supporting us. It has given us a great boost. And all our riders are really charged up to perform in this season. The technical irregularity was an over sight by our technical team which costed us our victory. However, this is just the beginning and we have just lost one round to our competitors and with 4 more rounds we are confident of being the lead. I congratulate all the three tiers for their top performance.”

The next round of National Chamionships will be in Chennai and the races will be held on August 2nd and 3rd.