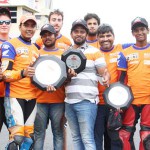 2014-08-05After a not so exciting second round we entered the mid season of the Indian National Motorcycle Racing Championship with a positive stride. The team worked hard to put the motorcycles back together especially after the big crash that Mathan #46 CBR250 had, which needed a lot mending and not to mention Sarath’s 165 Open Honda CBR 150 which needed a lot of development work to sort out the handling and electronic problems.

The championship becomes crucial from Round 3 of the championship with only two rounds left for the catch up game and we needed to perform in top form to score some crucial points.

Unusually, we welcomed two new riders into our team in the middle of a season Ami Van Poederooijen Iglesias #73 and S. Rajiv #81. With both the riders showing promising talent in the previous races of the season they are now a part of Honda Ten10 Racing Academy.

The heat had subsided a little bit when compared to the previous round at Sriperambadur and Saturday was a perfect day for qualifying and race 1. The team had to work extra hard to put together three extra motorcycles for the weekend. The hard work paid off with Sarath qualifying in second position on the grid and new team member Ami Van Poederooijen Iglesias qualifying right alongside Sarath in 3rd spot in the Honda CBR 250R class. Mathan and Yatin had to struggle with suspension problems and did not have an impressive qualifying session.

In the 165 CC Open category Sarath put the Honda CBR 150 R once again on the front row with a second place qualification.

After many years we also participated in the 165CC Novice stock motorcycle class with Ami and Rajiv representing B Strong Ten10 in this category riding the Honda CBR 150R.

The races itself were very exciting with our riders competing for the top position in every race.

Sarath #69 had a brilliant battle for the first position in race 1 and race 2 in the CBR 250 class. Whilst he settled for a very closely fought third position in race 1, in race 2 he managed to win in style giving the team the first top podium of the weekend. In the 165CC class Sarath had to settle for second place after a closely fought battle with the more experienced Rajini and their battle continues for the season. In the second race Sarath managed to bring home the bike in third place scoring valuable points for the championship.

Mathan#46 meanwhile had a better weekend after sorting out the suspension problems on his CBR 250 and had a brilliant race fighting for top 6 position in both the races. He once again scored valuable points for the team in the both the classes, 250 & 165.

Ami Van Poederooijen Iglesias #73, the new young half Spanish half Dutch from Auroville was a surprise package when scored his first front row start for the Honda CBR 250 Race. However his lack of racing experience did not give him the expected race result. The ever anxious and enthusiastic racer settled for sixth place and crashed in race 2. Meanwhile he had his first experience racing in the Group class on a Honda CBR 150R .

The youngest team member, Rajiv once again had a good qualifying session in the Group D Novice stock motorcycle racing class. He put the Honda CBR 150 on the front row and was confident to get a podium; however with a lot more to be done on the motorcycle and this being the first race he had to settle for sixth position.

Meanwhile Yatin continued to improve his performance in the CBR 250 class and we hope to see him in the top 10 next round.

Overall it was a good weekend with improved performance as compared to Round 2.