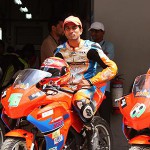 B-Strong Ten10 Racing started its Honda CBR 250 Championship campaign with a bang. With all new livery, T10 exhaust system and suspension the CBR 250s were in top notch form both visually and performance-wise.

Qualifying: Started amidst much confusion at the Buddh International Circuit, as a part of the Tata Prima T1 Truck Racing Championship. The qualifying results were promising with current champion Sarath #69 taking second position on the grid, Mathan #46 on the second row in sixth position and our third rider Yatindra #18 in eighth position on the grid in this first race. The top three riders were tied within 1â€ second, which promised a very exciting race.

Race 1: Saturday morning proved to be an exciting race with the pole sitter crashing out in the first lap of the race and the battle ongoing between Sarath and Prabhu of MotoRev India. The race was closely fought until the fourth lap when Prabhu crashed out in turn 3 giving the lead to Sarath who then went on to win the race comfortably. The surprise package was Mathan finishing in second position in his first ever CBR 250 race giving B-Strong Ten10 Racing a 1 & 2 on the podium.

Race 2: The grid swapped for race 2, Sarath and Mathan started from the front row but that did not prove any advantages as the race 2 was as thriller till the end with four riders fighting for the lead. There was a new leader in every corner with four riders exchanging position at every turn with less than half a second separating them; it was anyoneâ€™s race. The race was decided in the last lap in the penultimate turn when Mathan got ahead of Sarath to finish in second and third respectively.

New entrant Yatindra adapted to the CBR 250 and improved his lap times in both the races to the team’s satisfaction.

Overall a great weekend for the team with an impressive start to the season and both riders on top of the championship. Now the next round moves and merges with INMRC in Coimbatore where the team will have the extra effort to work on both the 165CC and 250CC and stay on top in both the classes.

We would like to thank our sponsors B-Strong Academy and Duty Free Store By Nuance for their supports.